Yo got to be kidding me! Yo! Sushi Launches a flagship store in Glasgow City Centre

I have recently started writing for good old Glasgow Living and fun oh fun, they called upon me to go and spend the evening tasting sushi and drinking sake at the launch of the new flagship store in Glasgow City Centre.  My review is below:

“On Thursday 7th July the Glasgow Living team headed on down to the launch of Yo! Sushi Central in one of the city’s iconic listed buildings on West George St to sample the sushi, sip the sake and listen to Glasgow faves, Sensu on the decks.

We took a little stroll along Buchanan Street and were greeted by a fun red rope welcome at the old Pizza Hut site and papped in true Glasgow style as we walked inside and handed a glass of sparkling sake, a first for me but it was bubbly, sweet and set me up for the night ahead.

We arrived just after 7pm and the restaurant was already full to the gunnels and buzzing with the Glasgow gliteratti and a never ending supply of sushi and sake – not to mention Asahi beer and a selection of red and white wine.  The interior has strong hints of classic Japanese style with a modern twist including a stunning Origami-inspired ceiling and ‘Shoji’ screen-inspired cladding to the internally illuminated belt.

We grabbed a seat across from the kitchen making sure we got first pick of everything that was put on the traditional sushi conveyor belt and ate way more than we should have but it was too good not to try.

The food was theatre: sushi topped with gold leaf, liquid ice pouring out the plates and science pipettes to drip the sauce on your sushi. 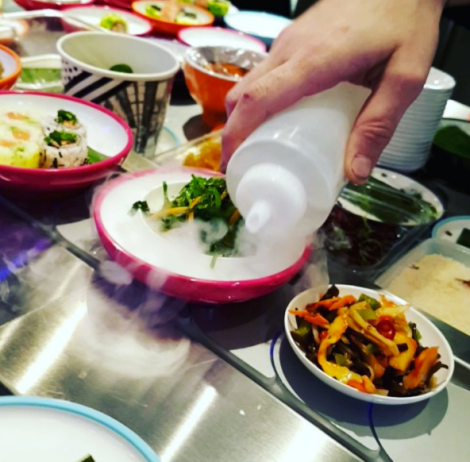 Highlights for me were the katsu prawns, crumbed pork poppers on skewers, the temaki and crispy seaweed but everything we tried was delicious and even had a little ball of chocolate something and a deep fried apple to finish off.  The salmon was fresh, delicious and we discovered that from now on only Scottish salmon will be served in YO!’s 78 restaurants across the UK: a win for Scotland and looking after our local businesses plus YO! is one of the only high street restaurants that prepare the food fresh, on site in an open kitchen.

“We are thrilled to announce YO! has returned to Glasgow city centre.“

“YO! fans can expect to enjoy exciting new food offerings, as well as all their popular favourites, enjoyed off YO!’s legendary signature conveyor belt, and set against a cutting-edge restaurant interior.

“YO! Glasgow Central is a fitting statement for a city we have a fantastic history with, and we are excited to confirm our doors are now officially open!”

And, there was a sneak announcement that an entire floor of the same size right above the main restaurant would be unveiling something exciting to the Glasgow nightlife scene sometime in the very near future, so watch this space.”

You can see the full article here, Louise Marques wrote the first part of the article on the GL site.

Published by Word Up, Mum!

30 something, writer, parent, insta addict View all posts by Word Up, Mum!